No charges filed in police shooting of VonDerrit Myers Jr., investigation differs with police on key points and raises case of mistaken identity 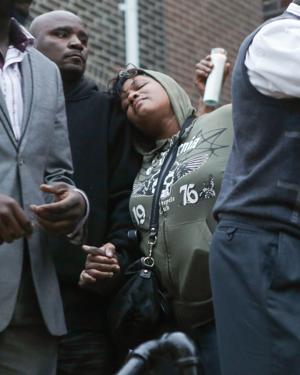 VonDerrit Myers Sr. and Syreeta Myers, parents of VonDerrit Myers Jr., attended a vigil in his memory, held in the Shaw neighborhood where he was killed, on October 9. 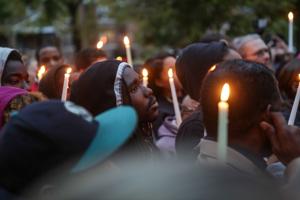 A young man mourned VonDerrit Myers Jr. at a vigil in his memory, held in the Shaw neighborhood where he was killed, on October 9. 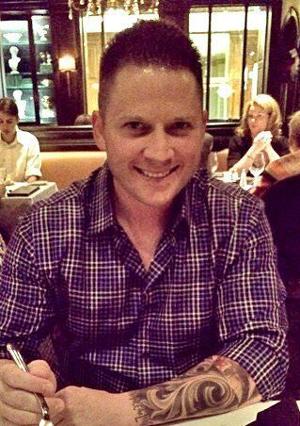 By Chris King Of The St. Louis American

St. Louis Circuit Attorney Jennifer Joyce has decided not to file criminal charges in the fatal police shooting of 18-year-old VonDerrit Myers Jr., she announced on Monday, May 18. Joyce based her decision on physical evidence that Myers had a gun that he fired at the St. Louis police officer who killed him, along with eyewitnesses who said that both men were firing at each other.

Since he was not charged with a crime, the prosecutor’s report does not identify the police shooter. Attorneys for the Myers family previously identified him as Jason H. Flanery, which a police source confirmed to The American in November. Flanery remains on active duty with the St. Louis Metropolitan Police Department.

In a draft report that Joyce shared in advance with The American, she argued that the October 8 fatal shooting on Shaw Boulevard was justified on two grounds, according to Missouri law, once the evidence that Myers was armed and shooting was accepted. It was justified as self-defense, she argued, as well as according to a state statute outlining acceptable uses of lethal force for police officers, which states “deadly force” is justified when a suspect “is attempting to escape by use of a deadly weapon.”

Joyce did not take the case to the grand jury, which is a 5th Amendment protection against unreasonable prosecution. As state’s attorney for the City of St. Louis, she is empowered to decide against bringing charges in any case within her jurisdiction. She told The American she did not take this case to the grand jury because her review of the evidence convinced her there was no reasonable basis for filing criminal charges.

The 44-page draft report was prepared by an investigative team from the prosecutor’s office that included, at Joyce’s invitation, an assistant U.S. attorney. It was prepared independently of the St. Louis police, though it relied on physical evidence and witness testimony gathered by the police.

Police claim to have retrieved the gun that Myers was firing, allegedly a 9mm Smith and Wesson, and ballistics evidence connected to the gun. The ballistics evidence is consistent with two people firing different guns from different directions, Joyce concluded. Police collected three bullets that went into the ground allegedly fired by Myers that match the Smith and Wesson. Another bullet shattered the window of a car across the street from where Myers died, though that ballistic evidence was too compromised to identify the type of that bullet.

Immediately after the shooting, police identified Myers’ gun as a 9mm Ruger, which they soon changed to the Smith and Wesson. Police explained the misidentification as an honest mistake  more http://www.stlamerican.com/news/local_news/article_33925cec-fd94-11...