Police forced a peaceful march that was organized by Black women off the streets of Oakland last evening in an unusual show of force that heralds the first enforcement of a nighttime prohibition on street demonstrations. Last night’s protest was part of a national day of action called #SayHerName focusing on police violence against women and transgender people. 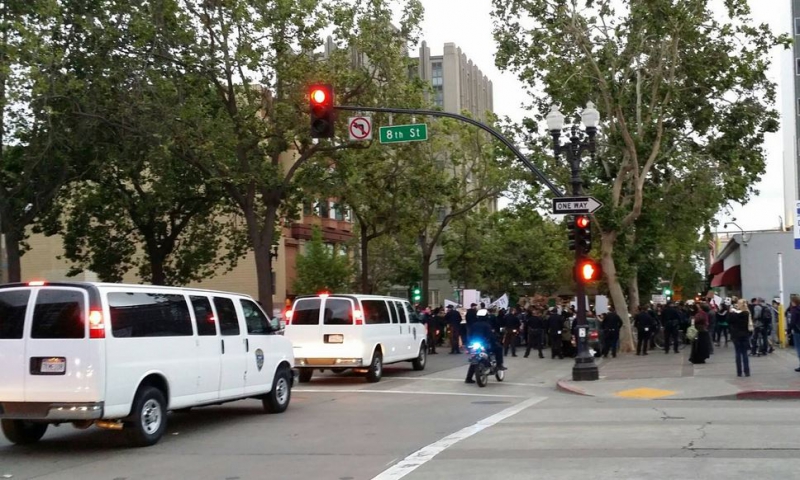 
The rally began just before sunset in Frank Ogawa Plaza where about 200–300 people gathered. After several speeches and recitations of poetry, the protesters announced their intention to march to the Oakland Police Administration Building seven blocks away. Demonstrators had not yet stepped off the sidewalk and into the intersection of 14th Street and Broadway when OPD addressed the crowd through an amplified sound system, stating that the march was “unpermitted.” As demonstrators walked into the street, police immediately ordered them back onto the sidewalk, citing California Vehicle Code Section 2800, which makes it an arrestable offense to not comply with orders of a police officer.

“The fact is we were threatened with arrest for marching,” said Cat Brooks, one of the facilitators of the protest. “This was a Black women’s and children’s rally saying to the police, please stop killing us, and our woman mayor organized the harshest response we’ve seen yet.”

“There clearly is a shift in tactics by the police,” said attorney Anne Weills, who was in last night’s march.

In an interview today, Schaaf acknowledged that she ordered the prohibition on nighttime street marches in Oakland. However, she argued that it was a not new city law, but rather a reinterpretation of an existing one.


[Republished with permission. All rights reserved.] 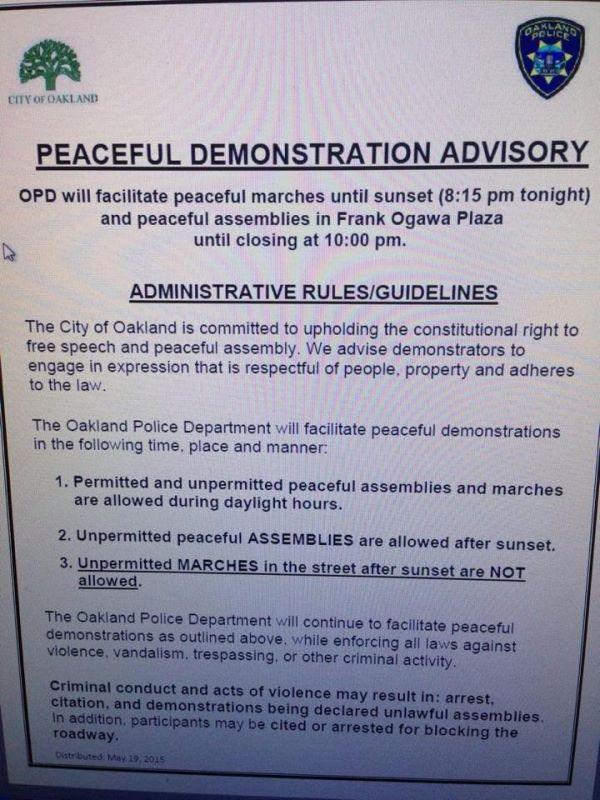 About 100-150 activists marched on Sunday before the organizers ended the event, police spokeswoman Johnna A. Watson told AP. Later a smaller group of 15-20 people staged another protest.

At least four people were arrested and 19 other received citations, she said, adding that the rally was closely watched by officers.

On Saturday similar protest was staged in the city. However, it turned more violent as dozens of activists were either arrested or cited by police.

"I was complying with their order to back up. I still don't know," one of the protesters, Jahmese Myres told San Jose Mercury news. "My arrest was unnecessary and unwarranted."

The rallies were sparked by a controversial ban on nighttime protests interpreted by the Mayor Libby Schaaf. She said that the existing policies and laws allow police officers to clear streets of protesters.

According to Schaaf, the city also needs to adopt new policy to combat damage to property and violence. Many businesses in the city were badly damaged following the May Day protests.