Dallas police officer Jimmy Hollis gets a one day suspension for shoving an #OccupyDallas protestor off a planter and then arresting him for "Assault on a Public Servant."

Seems like forever ago, but it was just last month that Stephen Benavides spent a few days in county lock-up on charges of assaulting a police officer and resisting arrest during that Occupy Dallas protest at the downtown Bank of America. But then,…

(12-13) 18:11 PST OAKLAND -- An Oakland police officer who shot an Occupy protester with a beanbag last month as the demonstrator took video of officers in riot gear has been removed from street duty along with his supervisor, pending an investigation, said sources familiar with the matter.

Police officials have released few details about the Nov. 3 incident in which Scott Campbell, 30, was hit in the leg with a nonlethal beanbag. The Oakland resident uploaded his…

The Next Frontier for Occupy: Protesters Take Over Vacant Homes, Rally to Protect Those Facing Eviction and Foreclosure

One of the most recognizable hallmarks of the Occupy Wall Street… 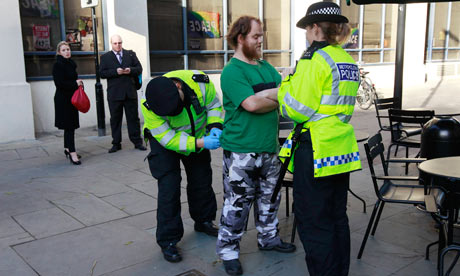 A demonstrator from the Occupy London movement is searched by police as he leaves a building owned by banking giant UBS in the City of London. Photograph: Suzanne Plunkett/Reuters

Banking giant UBS was granted an immediate and final possession order for its property in a one-sided hearing that circumvented the basic principles of justice, an appeal…

National Day of Action: The Actual Hygiene and Safety Crisis With Foreclosed Homes

Today is National Day of Action on Foreclosures.  Occupy Our Homes has…

A female protester has officially complained after police in Melbourne forcibly removed the tent dress she was wearing, leaving her nearly naked on the gound.
The woman, named Sarah, was one of several Occupy “tent monsters” who…

I was there to take down the names of people who were arrested… As I’m standing there, some African-American woman goes up to a police officer and says, ‘I need to get in. My daughter’s there. I want to know if she’s OK.’ And he said, ‘Move on,…

#Rahmageddon - #OccupyChicago - #N17 - will be a massive demonstration of solidarity and action.

#Rahmageddon #OccupyChicago #N17 will be a massive demonstration of solidarity and action.

Crackdown comes ahead of Thursday marches

UC Berkeley shooting: an armed man at an Occupy Cal protest was shot by UC Berkeley police but the event and the man's intentions cast a shadow over campus life and the protest.

Why I Got Arrested with Occupy Cal--and How By Celeste Langan. Associate Professor of English

Sunday, November 13, 2011
Why I Got Arrested with Occupy Cal--and How
By Celeste Langan

I participated in the Occupy Cal rally on Sproul Plaza on November 9 (my sign, "We're Afraid for Virginia Woolf," made it to the Daily Cal’s top 10) and stayed for the general assembly. The organizers of Occupy Cal asked those who were willing to stay and link arms to protect those who were attempting to set up the encampment; I chose to do so. I knew, both before and after the police…

More police brutality from the Occupy Cal protest at UC-Berkeley November 9, 2011. UC police yank women by their hair so they can destroy the encampment tents. Later, a woman is pinned to a bush and being batoned, and a man trying to rescue her gets…